Click on any of the photos to enlarge them.

After playing classical flute as a youth and a few years of studying latin congas, I was inspired by the mighty Rachel Melas to pick up the bass guitar in 1988. Since then I have played in numerous bands in Toronto ranging from funk and rock to jazzy folk, reggae and hiphop. Humorously, I cut my teeth by learning a few dozen Nancy Sinatra tunes by ear for a gimmicky band named in her honour. The Nancy Sinatras drew a loyal following. 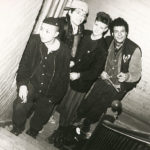 Hungry for the experience of creating original material, I left the Nancys to form The Matriphiles in 1991. That experience remains a highlight for me because of the wonderful creative chemistry among its four members and the anything-goes stylistic forum which combined very diverse influences.

I had already begun my brief stint as rocker chick in The Snowdogs when The Matriphiles folded in 1993. After a cross-Canada tour in a windowless panel van cranking out well-crafted Ramones-esque rock songs, I needed to give my punished eardrums a break! Soon I was engaged in an American tour with Meryn Cadell. I enjoyed a stint as bassist for songwriter Gloria Shreve and soon after created Dropdeadbeats in 1995. DDB brought me back to my favoured collective style of writing with Isabelle Noël, Debbie Augustt-Moffat and Jamie Browning. We produced a sizeable repertoire of mostly funky songs, with one landing a winning spot on the 1997 CFNY Toronto New Rock Search CD (hear it via my Audio page).

After a fortuitous gig sharing the bill with Roach Motel, I got a call from one of their members saying they needed a new bassist and thus began a fun ride with that funk/hiphop band which carried on for a couple years after the breakup of Dropdeadbeats. We had a blast playing clubs and colleges from coast to coast, igniting the dancefloors with our very groovy, positive vibe. Our video for the song “What’s Going On?” from the album “Spend the Night” enjoyed frequent rotation on Muchmusic (view it at the Video link). During this time Isabelle, from DDB, and I enjoyed a few opportunities to indulge our more experimental tastes with The Kitchen Sink Project. Our most memorable gigs were those with installation artists Tempermettle for whom we created live ambient soundscapes both in Toronto and in New York City. Concurrently, I also had the opportunity to play with singer Tamara Williamson, stepping out with the fretless for the first time.

I left Roach Motel in 2001 to head to the woodshed to focus on learning a few new skills: digital audio recording/editing, scoring for video and film, writing music for dance and multimedia and taking up the cello. I occasionally supported spoken-word artist/singer-songwriter Evalyn Parry with fretless bass, bohdràn, djembe, flute, congas and vocal harmonies. I played on the wonderfully eerie “War Dream” which is the first track on Ev’s album “Small Theatres“.

I played bass with Kelly Clipperton‘s, Kelly and the Kellygirls from May 2003 to the fall of 2006. A fun pop/rock with fabulous, high-energy performers, we put out two albums, numerous videos and toured Canada and California.

In the spring of 2006, I agreed to step out with the cello supporting Tucker Finn, a singer-songwriter who used to co-front The Jane Waynes.

Brazen Crush formed in 2004 and played in and around Toronto for three years. This was a collaborative pop-jazz-funk fusion group with Steve Sauvé on keys, Cheryl Reid on drums and Stacy Ricker singing and playing electric guitar. (Stacy replaced original singer Jennifer Moxon.) With this project, I began to regularly include cello in the performance of our original music.

I was invited in 2007 to write and record cello parts for albums put out by Amer Diab. I have since added parts to Amer’s second album.

Other members of my musical family have included Morgan Doctor (tablas & other percussion) and Jayme Stone (banjo). I had the great pleasure of playing my African kamale n’goni with these top-notch musicians in an instrumental trio called Yala. The Ontario Arts Council validated this project with a composition grant in 2005.

As of fall 2006, I have been accompanying my dear friend, the talented singer-songwriter Peter J Slack on fretless bass and cello. We enjoyed participating in the Winterfolk Festival in February 2007 and 2008.

January 2007 saw the debut of an improvisational cello-didgeridoo duo called Dreamfire with William Pipher. A unique combo to be sure! We became regular performers at Kathleen Rea’s Contact Dance Jams. I also began playing cello and bass with fiddler Eric Nagler and pianist Matt Segriff. This became a great opportunity to hone my celtic cello chops.

Having been friends for almost twenty years, I began playing bass in S Lynn Phillips‘ ska band Random Order on New Year’s Eve 2007. I enjoyed touring BC, the Yukon and Northwest Territories with this great party band in the summers of 2007, 2008 and 2009.

Since February 2008, I have experienced the delight of playing from the heart and not the chart. I was invited by Gary Diggins and Yuri Gorbachow to join a trio called Triund. We create improvised soundscapes for an interesting variety of events including The Big Beat Solstice and Equinox celebrations, Nia classes and the Tribal Dance Community. I play bass, cello, didge, n’goni, flute, percussion and sing.

The fall of 2008 brought good times as bassist and cellist with The Bhadra Collective, a 9-piece band getting your groove on with chant-based music, world-beat grooves, multiple vocals and exotic instruments. I continue to play cello, bass and, my newest instrument, didjeridoo with band leader Dennis Gaumond in a duo called Jennis. We released our debut album, The Current, in June 2014 and play all over Southern Ontario regularly. Having completed Western-Canadatours in the summers of 2016 and 2017, we hunkered down to create our sophomore album, The Mirror, which launched in October 2019. Check out the video for the song “Sneak Past The Mirror“, directed and shot by Olya Glotka.

2020 brings a welcome return for me to driving the groove bus as bassist for a new jazzy-funk outfit christened Tricky Zipper. We’re in the development stage and look forward to some Toronto gigs down the road.